“We used magnetotelluric methods to discover a dynamic and salty groundwater system beneath Whillans Ice Stream, West Antarctica. Our results indicate the groundwater represents the largest reservoir of water beneath the ice stream and can influence how ice flows.” - Chloe Gustafson, lead author

WATERTODAY reached out to Chloe Gustafson, lead author of the paper, A dynamic saline groundwater system mapped beneath an Antarctic ice stream, published May 5, 2022, in Science. 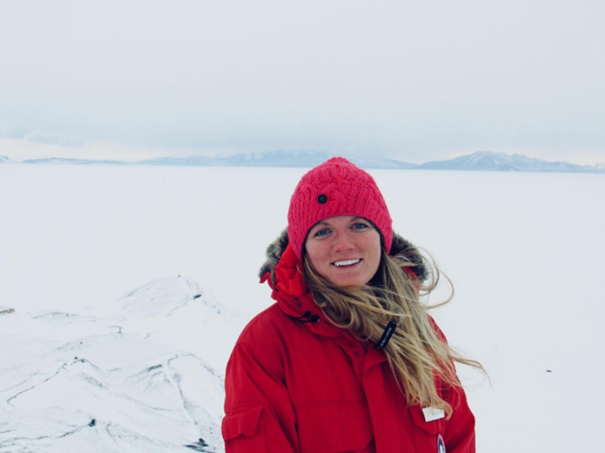 Geophysicist, Chloe Gustafson investigates hydrogeologic systems hidden beneath oceans and ice sheets, characterizing the distribution and salinity of offshore and subglacial groundwater reservoirs in order to understand the interconnected hydrogeologic, climatic, and oceanographic forces that both influence and are influenced by groundwater

WT: What are your research interests. Please describe the journey that brought you to Scripps and the reasons you have pursued this path.

Gustafson: I first came to Scripps as a Ph.D. student in 2015, primarily interested in electromagnetic geophysics. After finishing my Ph.D. at Columbia University in New York, I returned to Scripps to work with my current supervisor (Helen Fricker, a glaciologist).

I knew I wanted to use a geophysical method (electromagnetics) and I knew it had to be something really interesting.

I had worked on two water-related projects during my Ph.D. at Columbia.

Electromagnetic geophysical methods are very sensitive to groundwater so it was a natural research course to pursue. Coincidentally, my advisor happened to have a couple of recently funded proposals to image groundwater in Antarctica and I thought that would be a cool research project to be involved with.

As I progressed further into my graduate studies, I began to appreciate the importance of groundwater. Finding groundwater beneath the seafloor and below ice sheets was particularly intriguing.

WT: You were the lead author in a research paper recently published in Science, (A dynamic saline groundwater system mapped beneath an Antarctic ice stream) which reveals a vast underwater reservoir beneath the West Antarctic Ice Sheet. Where did this research take place? How long did you work on this project?

Gustafson: This research took place on the Whillans Ice Stream in West Antarctica. It is very remote, about 1000 km from McMurdo Station (the main US base station) and 700 km from the South Pole. It feels like you are on another planet! We collected this particular data set over the course of 6 weeks, but it took several months of prior planning too. Analyzing the data took over a year.

WT: What is the subglacial hydrologic system?

Gustafson:  The subglacial hydrologic system is the catch-all term for the various forms of liquid water beneath the ice sheet. In the traditional view of subglacial hydrology, this water can exist as film (on the order of millimeters), rivers, lakes, and water with a thin, approximately 10 meters of squishy sediment called “till”. Water is generated here from the geothermal heating, pressure from the overlying ice, and friction of ice scraping against the earth’s surface. The water lubricates the base of the ice, making it flow faster.

WT: In your study, was there new data you discovered to update what you refer to as a “traditional view of subglacial hydrology”?

Gustafson: Our study updates this view to include another form of water “deep groundwater” held within sediments that are around 1 km thick. You can think of these sediments as a sponge. The sponge can soak up water and the sponge can also release water. If we squeeze the sediment sponge, the amount of water that would be pooled on the surface would be 220-820 meters deep. 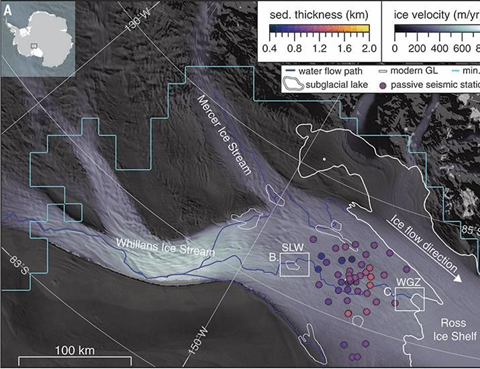 It’s a massive amount of water that is not currently accounted for in our models of how ice flows. Not to say all this water is necessarily contributing to ice flow, but some of it could be.

WT: Tell us about Whillans Subglacial Lake. What makes it such an interesting area to research?

Gustafson: Whillans Subglacial Lake is interesting because it is an “active” subglacial lake. Active means that it changes in volume. Over several months, the lake will fill with water, and then it will rapidly drain over a few months. And this cycle repeats. We still don’t really know what triggers the fill/drain cycles. When the lake drains, it eventually makes its water out to the ocean. These cycles have been tied to ice movement in a few instances, but their effects on ice flow are still not certain. Another interesting thing about this lake is that we have actually drilled through the ice and have samples of the water on top of the sediment. There is a unique ecosystem that lives in this dark, cold, and isolated lake.

WT: How do you collect your data?

Gustafson: We map groundwater using electromagnetic geophysical methods. It’s basically like taking an MRI of the earth. We measure electric and magnetic fields. Ice, sediments, water, and bedrock all have different electromagnetic signatures that we are able to detect with magnetotellurics.

To get a little more into the weeds...electromagnetic fields that are generated from solar wind interacting with the magnetosphere generate an electromagnetic source that travels downward into the earth’s subsurface.

Secondary electromagnetic fields are generated within the subsurface. These secondary fields look different for different types of earth materials depending on the electrical resistivity of those materials.

WT: What is it like being a researcher in the field?

Gustafson: Being in the field is tough work. In Antarctica, the physical aspect was certainly a challenging part of the expedition. There were just four of us and we were all responsible for collecting data as well as managing our field camp.

Typically, on research vessels, we are a 24-hour operation, with just one crew working the 12-hour day shift, and the other working the 12-hour night shift. We are either prepping equipment to go into the water or disassembling equipment that we just took out of the water. Sometimes we’re working on glassy seas and other times the seas are rough with waves crashing onto and flooding the deck – it's the middle of the night and you have to get the work done.

WT: Are you finding any freshwater?

The last time the ocean covered these sediments was 5000-7000 years ago. It is probably a mix of different aged ocean water. The fresher water that is closer to the ice base is from ice melt. As the base of the ice sheets melts, some water is pushed into the sediments by the overlying ice

Gustafson: With current subglacial drilling equipment, it is very difficult to drill deep enough to access the groundwater. Not to say it’s impossible, it’s just an engineering challenge.

WT: Any clues to climate change and rising sea levels?

Gustafson: We found evidence that this groundwater is dynamically connected to the base of the ice stream (where the ice makes contact with the ground) where water plays a key role in lubricating the ice, enabling it to flow quickly.

Groundwater isn’t currently accounted for in models of ice streaming. We need to start accounting for this missing process in our understanding of past, present, and future ice behavior.

Groundwater is just one piece of the puzzle. It is hard to make anyone impact statements about climate change or sea level.

WT: Do you have any words of wisdom for students considering a research career – especially those who are interested in understanding and discovering the importance of water?

Gustafson: Surround yourself with people you enjoy working with and always be building a constellation of mentors that you can reach out to for advice.

Only pursue what excites you about water. One aspect is the story that water can tell.

Water holds clues about Earth’s past. Water can tell us when an ice sheet once covered a region of the earth, or when sea levels were lower.