brought to you in part by

A Toxic Cocktail In Your Tap Water?

Nonprofit Organization provides data-based resources proving a passing grade from the government does not necessarily mean the water is safe.

“The EWG (Environmental Working Group) decided to establish our own drinking water standards that are not based on compromises with polluters, politicians, or water utilities. Our scientists looked at the best and latest research to define our own water quality goals that truly protect public health.” 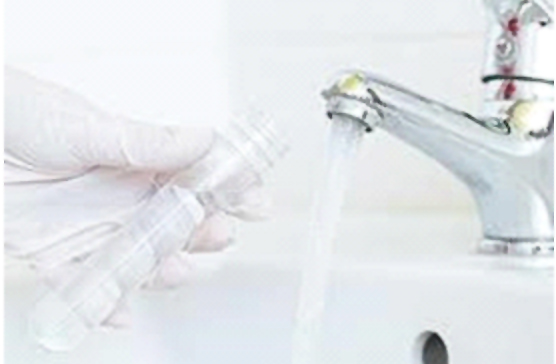 Tap water in the U.S. can contain several pollutants - sometimes all at once. Water contaminants are regulated one at a time but that is not how people are exposed to them and they aren’t exposed just once. Exposure to multiple contaminants in drinking water can have a cumulative effect. Photo EWG

WATERTODAY reached out to Sydney Evans, Science Analyst at Environmental Working Group (EWG) who told us that the small non-profit organization is a team of scientists, policy wonks and other experts who are dedicated to making tap water safer for all Americans.

WT: How and why did the EWG Tap Water Database evolve?

Evans: EWG’s database, first published in 2005, aggregates data from utilities’ reports of water quality tests into one platform that is easy to search by location, community name, or contaminant. The latest release of the database includes data for tests conducted in 2018 and 2019. For this update, released in November 2021, EWG analyzed nearly 31 million test results for 534 different contaminants or contaminant groups, 324 of which were detected in drinking water.

Evans: Just because levels of toxic chemicals in drinking water are legal under federal law, it does not mean they are safe. In fact, the federal tap water safety oversight system is rife with issues.

Since the passage of the 974 Safe Drinking Water Act, the EPA has set legal limits, or Maximum Contaminant Limits (MCLs) for about 90 different contaminants

In theory, water utilities must keep contamination levels at or below these MCLs. In practice, there is little consequence for utilities that don’t meet federal standards. Violations – where a contaminant exceeds the MCL – are likely under-reported in the first place. Exemptions are rampant. And fines are rarely issued. Utilities can rack up violations year after year.

And those federal standards are, we think, already too high. Most of them, if not all, are woefully inadequate for protecting public health.

Drinking water limits -- both the amounts and which chemicals have them – have not been updated in decades. MCLs are often based on what water utilities and corporate polluters say is reasonable, not what would protect public health.

And contaminants are regulated on a case-by-case basis. No one is looking at the total threat posed by the combination of contaminants – what we sometimes call a “toxic cocktail” that so many Americans imbibe every day in their tap water.

The regulatory process established by the EPA to set an MCL does not consider the heightened vulnerability to toxic chemicals of children, infants, and the developing fetus.

Finally, there are many chemicals known to pose health risks that are found in drinking water for many, many people – that aren’t regulated at all by the EPA.

WT: Please explain your “novel approach” in your case studies.

Evans: In the absence of meaningful federal protections, EWG’s database provides health-based guidelines, based on the latest science, for many contaminants found in water supplies, as well as options for Americans who want to reduce contaminant levels in their tap water.

You can read more about our tap water standards

WT: What issues are there with water treatment and distribution?

Evans: Water treatment and distribution itself can lead to some contaminants. Disinfection byproducts are formed as a result of disinfectants like chlorine reacting with other contaminants present in water, like organic matter. The class of disinfection byproducts is huge, and individual concentrations vary widely based on the characteristics of the source water. Only a few are monitored and legally limited.

You can read more about disinfection byproducts

You can check our otherpeer-reviewed studies, including many on tap water contamination.

We also obtained the results of drinking water tests for unregulated contaminants – substances that are known to contaminate drinking water but that have no national legal limits – from the Environmental Protection Agency.

WT: WaterToday has viewers in New York, Ohio, and Georgia. What would you like our audience in these three states to know?

Evans: Some of the new elements of this year’s tap water database that your viewers might be interested in including 56 contaminants for which utilities tested for the first time – the contaminants themselves are not new – in the past two years, including several chemicals that are part of the enormous PFAS, or “forever” chemicals.

In terms of trends, we continue to see high levels of nitrate from agriculture fouling drinking water in rural areas of the country, as well as – and this might surprise some people – in many cities. but these trends are nationwide and not specific to any particular states.

WT: Where do we go from here?

Evans: Polluted tap water is not and should not be a partisan issue; it affects everyone. Now, it appears that the regulators and lawmakers with the power to address drinking water safety on a community-wide level are finally starting to listen.

Still, far more resources are needed from the federal government to thoroughly address all forms and sources of drinking water contamination.

The EPA also needs to consider drinking water quality as one of the metrics it uses to decide how to distribute drinking water programs more equitably, so the worst-affected areas receive the most help.

There are challenges when it comes to delivering safe drinking water to millions of families who currently don’t have it. But they can be solved when the public and our elected officials come together around a common purpose; the right of every American, regardless of race, region, or income to have clean water.

The bottom line is that it’s clear that our tap water system is failing. The federal government needs to inject massive amounts of capital to update infrastructure across the country and make sure that all Americans have access to clean water, which is a human right.

And the Environmental Agency needs to overhaul how it monitors and regulates widespread contamination to protect public health by taking into account the latest science, moving quickly to revisit outdated standards, and protecting the most vulnerable – and historically disadvantaged—among us.